Today was my first of 33 radiation treatments. I arrived early so I could visit the gift shop and buy some clear Aloe and Tom’s aluminum free deodorant and then proceeded to the changing room.  I am supposed to strip from the waist up, put on a johnny tied in the back and a robe and then sit out in the (very well air conditioned) waiting room.  The first johnny I took out was HUGE.  As was the 2nd, 3rd and 4th.  By now the laundry basket was full and the pile was dwindling so I gamely put on the 5th one I pulled out.  I wrapped it around myself 3 times and had to pull the strings through the arm holes and tie it in the front.  Anyone that needs something that big will likely not fit into the CT scan, so I’m not sure why they have them, let alone so many.   I assumed the majority of the people in that waiting room would be similarly dressed, but nope.  I was the only one.  Everyone else probably got a memo telling them to wait for the next load of clean laundry.  They were all in street clothes. Then I remembered there is another waiting room for those of us in various states of undress.  Anyway I sat there dressed like a burrito until it was time to go back. The treatment went well with only a mild glitch when they told me to take my arms out of the gown.  It was easier said than done. They drew on me again. I am going to bring coloring books for those girls so they will leave me alone.  I thought the tattoos were quite enough, thank you.  After the treatment you get the sense they are in a hurry to get you out and the next person in. Mainly because they whip your form off the table as soon as your head clears it and start setting up for the next guy. So I re-wrapped as well as I could for my trip back through the waiting room to the dressing room. When I stepped out I was turned around. There was a flimsy dressing partition where there should be a door. The tech saw my confusion and said “Oh sorry, just step around it, that’s our door”.  Anyone over 5’4″ walking by would have a clear view of me being radiated. FML.

I leave you with this cute little burrito. Did you know it is impossible to find a stock photo of an adult burrito?  Weird. 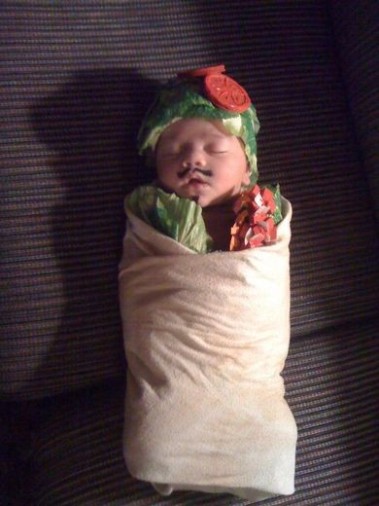