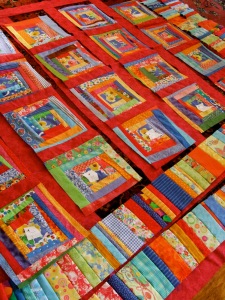 I haven’t blogged for a bit. Life is pretty much back to normal. We have had a few household projects, the main one being redoing my office. I should say transforming my former junk room into a workable office space. It was one of these rooms that anything I didn’t know what to do with would get dumped in.  I had one small bookcase groaning under piles of books and more piles in every corner.  This summer when we redid the bathroom we sacrificed the office closet and that left us with some extra wall space, which is now sporting new bookshelves. I spent all weekend sorting, dusting (good Lord where does it all come from?) and re shelving books by author and genre. I made room for some of my sister’s books as well (she got two whole shelves!) and even parted with a small stack of my own (baby steps… I have a hard time letting go of books). Found homes for all the assorted “stuff” and organized my workspace.  I now have a combination library/office and the best part is I actually had the energy to work for two days straight instead of a few hours at a time and then having to recuperate on the couch.  At my last oncology visit I was told the chemo was all out of my system and I’m finally starting to feel like that is true.  Just a little post chemo weirdness though.. my eyebrows fell out again.. not all of them, but they became noticeably thinner and now have returned. My eyelashes completely fell out twice since returning.  I wasn’t aware that could happen but a little googling tells me it’s not that unusual and it will likely happen a few more times.  My fingernails never peeled or got terribly discolored though  that is a pretty common side effect of the chemo I was on. I kept them short and with layers of polish to keep them strong. Now, however, I have white lines in all of them and one thumb nail looks bruised.  All of the nails are peeling but from underneath. As long as I keep them polished they look fine.

I just realized tomorrow is the anniversary of when I discovered the lump that got me into this mess.  Maybe I’ll bake a cake. Or have a drink to celebrate.  Actually I probably should celebrate the fact that I found it.  Or not.  Most likely, not.  My doctors haven’t use the words “cured”,  “cancer free” or “NED” (no evidence of disease). I’m not sure when or if I will ever hear those words before the 5 year mark (countdown started after I finished treatment and began Tamoxifen.. so five years from September, 2012).  I have my first post diagnosis mammogram scheduled for November 12. Maybe I can get a little Ned out of them then.  I am prepared to be told there are changes from last year. I should hope so considering I’ve had surgery and radiation since then. Unfortunately that won’t make it any less scary to hear, I’m afraid.  And if the radiologist utters those words, regardless of what the changes are my doctors are obligated to follow up with more tests and then I get to wait on results again. I’m starting to get that I won’t feel free of this for many, many years, if ever.

I am flying for the first time since surgery this upcoming weekend. In preparation I visited the Lymphadema Clinic and was fitted for a sleeve and glove.  My doctors never said much about the need for this but I requested a referral. I was sent to P.T. where I was told compressing the arm if I’m not already having trouble would cause more harm than good (makes sense). Since I had heard that women who previously had no problems did when flying I asked if I could have a sleeve just to bring along as insurance and promised I wouldn’t wear it unless I needed to.  The physical therapist agreed and set me up with the Clinic.  At the Clinic I was told I HAD to wear the sleeve when flying because once I had problems they wouldn’t go away.  She then proceeded to explain all about lymphadema.  Who needs that!?   I have had no problems at all, but I only had one lymph node removed and I’ve been pretty diligent about exercising the arm and following as many precautions as I can.

In other news, I’ve finally narrowed down my tattoo to 3 choices.  As of this weekend it was 4 but I decided against f*ck cancer in a fancy script.  As I’m going to be a grandmother, that would be unseemly.   I know I’m a bit off schedule having insisted I would get one before I turned 50, but I couldn’t commit.   I’ll be in Austin next week. Where better?

These are the 3 top contenders. 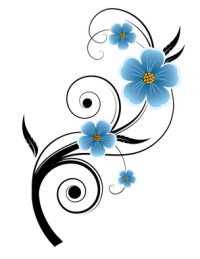 The forget me nots in honor of my sister.

This means Survivor (too cliché?)

Speaking of voting… robocalls are the devil.  We have one registered Republican, two Democrats and an Independent at this address and we all voted early since we will be away on November 6. These calls are driving me batshit crazy!

Just had to get that out.