Growing up we were Debbie and Susie. Two sisters, one blond and one brunette, two years apart. Like all sisters we played together, fought bitterly, made up, giggled, plotted, fought some more and managed to reach adulthood without killing each other. I was the master at pushing her buttons until her son came along and installed new ones.  He came along exactly 6 weeks after my first daughter so we experienced first time motherhood together.  As we raised our families the arguments were fewer and further between but we could still piss each other off like no one else could.   We both recently started watching Dark Shadows on Netflix. She was many episodes ahead of me and wanted me to catch up. Watching reminds me of when the show aired originally.  I was 3 or 4 and she was just starting  school. I would stand in the window and watch for her bus.  When “my Debbie!” appeared, I knew it was time for Dark Shadows. We watched together every afternoon.   In the last few years Debbie has gotten to experience being a grandmother to 3 adorable little boys.  It made me laugh when one of them would refer to her as My Debbie.

Debbie was diagnosed with Lupus when she was in her 20s.  She was never exactly healthy, but never really had any of the bad flare ups you read about.  She suffered from terrible migraines, but so did my mother and myself. She had a lot of rheumatoid symptoms and was on pain medication most of the time. But during all that she raised her son, returned to school in her 40s, got her teaching degree after subbing for many years and was excited to land a job teaching 7th graders.  I thought she was insane for picking that age group. She loved every minute of it.

When I got my cancer diagnosis she took it harder than any of us.  She cried so much that at one point I told her to “dry up” or I wouldn’t talk to her.  She didn’t cry in front of me again, but I’m sure she still shed plenty of tears.  The day of my surgery she received a call from her doctor who had been going over some recent lab work.  At that point she had been experiencing horrible infections for months and antibiotics were not working. He suspected CVID (common variable immune deficiency). None of us had heard of it but she met with a specialist who agreed and wanted to start her on infusions of intravenous immune globulin (IVIG) as soon as the following week.  A little Internet research prompted her to ask for a second opinion as this treatment would be administered once a month for the rest of her life.  The 2nd doctor would not agree with the diagnosis until he ran his own tests.  Each time it would take weeks to receive the results, at which time he would decide one more test was necessary, then one more.   By the time the diagnosis was confirmed, treatments were agreed upon and the insurance finally approved them (but only for 3 months) it was 7 months since the original diagnosis. She had two treatments and was feeling better than she had in a long time. Then, one week after the 2nd treatment she passed away in her sleep. It was July 10.

My last entry on this blog was July 9. I was outraged that my radiation had been cancelled and I was going to have to tack one more day onto the end of my treatment.  She read the blog and called me to commiserate.  We spoke for over an hour. She had had a relaxing day reading in the sun. When I saw her over the weekend I had loaned her a stack of books and her plan was to alternate one book for pleasure with one for her curriculum planning.   18 hours later I was standing over her bed where she looked like she was sleeping peacefully, curled up on her side like she had slept every day of her life.  It’s been over 10 days and it still doesn’t seem real.

I returned to treatment Monday, now a full week behind schedule.  I commented how f’ed up it is that cancer treatments feels like a return to “normal”. She would have appreciated that, along with the black “fuck cancer” bracelet I have taken to wearing every day.

I miss my Debbie. 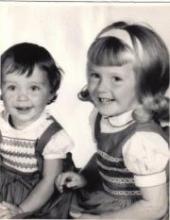